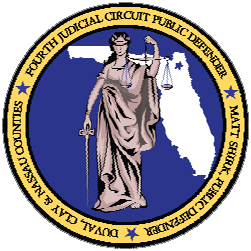 Organization Researching Florida Juvenile Justice Visits Jacksonville PD Office Jacksonville, FL (June 13, 2013): The nationally recognized Juvenile Unit in the Office of the Fourth Judicial Circuit Public Defender works hard to ensure that young people in Northeast Florida who find themselves in the justice system are treated fairly and if possible, are not haunted for life by a criminal record that stems from a potentially common, youthful indiscretion. Alba Morales (pictured, center), a researcher investigating abuses in the U.S. criminal justice system for the international organization Human Rights Watch, visited with the team of Assistant Public Defenders who handle the juvenile caseload in Duval County to learn more about the practice in Florida of ‘direct-filing youthful offenders,’ or charging young people as adults in certain crimes. 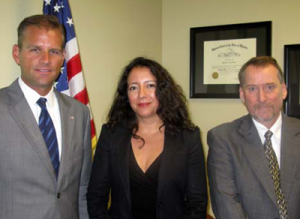 Fourth Circuit Juvenile Director Rob Mason (pictured, right) indicated that “it is significant that Human Rights Watch has chosen Florida, particularly Jacksonville, as part of their research into the legislatively sanctioned practice of direct filing juveniles who face criminal charges. Florida is believed by many to lead the nation in producing the largest number of children prosecuted as adults and serving adult prison sentences.

Studies have shown that prosecuting children as adults fails to improve public safety by reducing crime and that children sent to the adult system actually recidivate sooner and more frequently. Additionally, many of the young people transferred to adult court are non-violent offenders who pose little threat to public safety.”

Juvenile Justice has been a heavily studied subject matter in Florida in recent years and findings such as those released in 2012 by the Florida Tax Watch Center for Smart Justice have prompted greater scrutiny into how the government treats young people who fall into the criminal justice system. Human Rights Watch which fights for human rights around the world is the latest, independent organization to gain interest in the direct file issue. Director Mason and his team of Assistant Public Defenders in Jacksonville who battle for direct-filed clients daily in Duval Courts spent an afternoon with Ms. Morales to help her understand first-hand how Jacksonville handles juvenile offenders. Human Rights Watch hopes to complete and issue their report in the Fall.